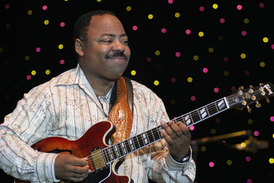 This record really needs no introduction, selling over 120 million copies worldwide since its release in 1982, yes, the biggest selling album of all time. This was the record that really cemented Jackson as the king of pop (of course, as his 6th album, this was already common knowledge), produced by the legendary Quincy Jones, the album has the quintessential 80's pop sound; funky guitar work, disco grooves, synthesizers and memorable basslines.

I just want to put now, there is no malice, or copyright infringement intended here. This page is for the use of the aspiring guitarist and student of music. My hope is that by using these transcriptions you can dig a little deeper into pop guitar and arrangement. Don't stop here, keep exploring, never stop learning. 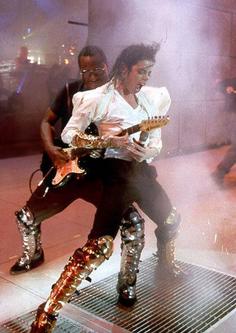 The guitar playing duties on the album are down to many names, mostly studio session aces of the day. It's common knowledge that Eddie Van Halen played the solo on "Beat It", legend has it that he recorded it in just one take and completely free of charge! (I chose to avoid including this solo here as its such an integral part of the recording - we're just here to learn pop guitar!)
The other big name of today that graces many of the tracks on this album is Toto wizard Steve Lukather (In fact, its the entire band Toto that lay down a lot of the rhythm section work on this album). Steve is the man responsible for the balls to the wall rock swagger on "Beat It".
Aside from the more rock orientated players, the album is also the work of some lesser known heroes of funk and R&B who lay down the majority of the record including Dean Parks, Paul Jackson Jr and David Williams. These are the cats we're really going to look on this page, the unsung heroes who's complete mastery at creating textures using overdubs is something we, the working guitarist, could all learn a little from.

Gear wise, we are playing funky pop here, so nothing is more suitable than a Strat in position 2 or 4 (the "out of phase" quack), but any guitar that has a 5 way and can combine the neck and middle pickup will do great  - Williams was a fan of the Ibanez Roadster, so there are no rules. A compressor will really help to give you that 80s sound, but aside from that we hear a variety of effects on the album, so try and source a delay, phaser, chorus and auto-wah/envelope filter.

Wanna Be Startin' Something

We start the album with a prime example of just how little this style of music needs, Wanna Be Startin' Something just has two sections. Above is the main groove, it is very important to play with rhythmic precision. Add some compression and you're one step closer to being David Williams.
Below we have the main riff (lower staff) and its harmony (upper staff). I don't think its really important to sit and think about what notes are being played, or what harmonies are being created, the idea is creating a great rhythm. This involves some quick position shifts, so practice slowly.

Another example of David Williams funk expertise. It's important to notice we are playing swing 16ths. The lower staff should be played with a very aggressive auto wah, as always, take it slowly and listen to the recording carefully. The upper staff is all about adding rhythmic punctuation, the notes arent really important, its all about the rhythm.

This part is VERY low in the mix, so listen to the recording closely.

The Girl Is Mine (With Paul McCartney)

This track is credited to Dean Parks and Steve Lukather, its a very carefully crafted two guitar intro mixing diads and rhythmic popping. Try reading the rhythm before playing the part, its interesting to note where the parts play together and where one plays while the other rests. Pay careful attention to the picking directions as these will help keep the timing solid. 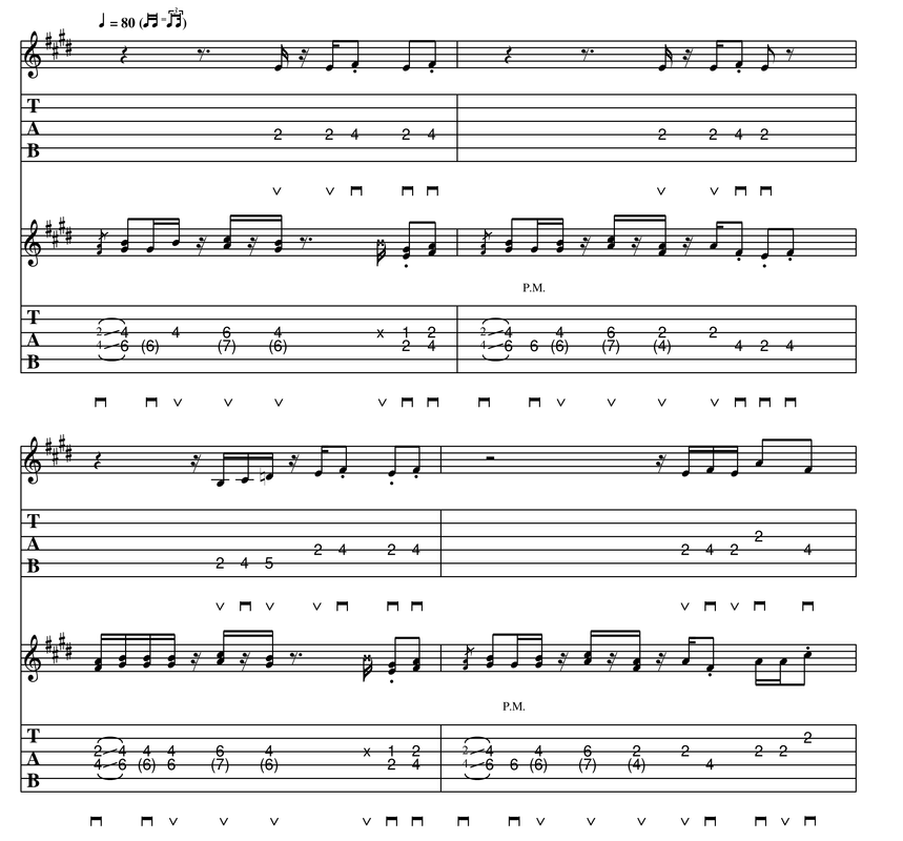 this is just an extension of the intro, really precise rhythmic popping. The picking directions will make this easy, but being able to read the rhythmic notation will help. You can push and pull a little here and add your own variations, thats why it sounds human, and not like a loop.

David Williams again, the same principles as everything else we have seen so far. This is classic funk playing, so get the tone right, pay careful attention to the staccato, and the picking directions. This part is played on many occasions throughout the song and is quite speedy, so endurance will be key to getting the sound right here.

This line has been transcribed in position 1, though can also be played in position 4 (where the last lick was played). Add some phaser for the authentic sound.

Steve Lukather here (tuned down a semitone). This is the most commonly covered guitar tune as it is such a rock orientated song.

This mixes the rock tone with the more funk orientated muted strings and rhythms.

Nothing complicated here in terms of harmony, just powerchords. This is given life when the 2nd guitar is introduced, playing one melodic cell over both E5 and C5.

This is an octave line played to add another texture to the chorus.

Notice that this line is identical to the last one seen, only played on an F#.

Here we have a heavily compressed guitar part that needs to be executed with complete accuracy to really get the tone heard on the recording.

Another ballad now, the key here is to fit in with the synth strings and add an additional timbre to the mix.

This is another popping line very similar to that heard on "The Girl Is Mine", at this point we should be noticing the running theme of syncopated 16th note rhythms.

This is one of my favorite licks on the record, moving around a Bm triad before playing playing a unison with the vocal line. Its useful to note that although I have transcribed this as upstrokes on the high E and B string, I choose to use hybrid picking (the other fingers on the picking hand)

P.Y.T. is most definitely my favorite tune on the record, its unrelenting disco groove and funky rhythm guitar is some of Paul Jackson Jr's best moments in recorded history. This first line is a pair of diatonic thirds on the G and B strings.

This is the popping line we hear throughout the song. You will need to play it in different places in the verse, but use your ears and it shouldn't be too much trouble.

For the chorus we have some classic funk rhythm style playing, though the idea of playing a bar and then hammering onto a chord may be something you are familiar with because of Hendrix's playing. From there we move on and play position 3 triads (for those of you familiar with the CAGED system). We use a G, A and B triad, we could analyse this further as no key has 3 major key's a tone apart; but in reality, why would we? It sounds GREAT.

This is just a tag played once in the song to transition from the chorus to the verse.

Here we add a little more distortion and move powerchords up chromatically, this is the "rock out" section of the song, so enjoy it. 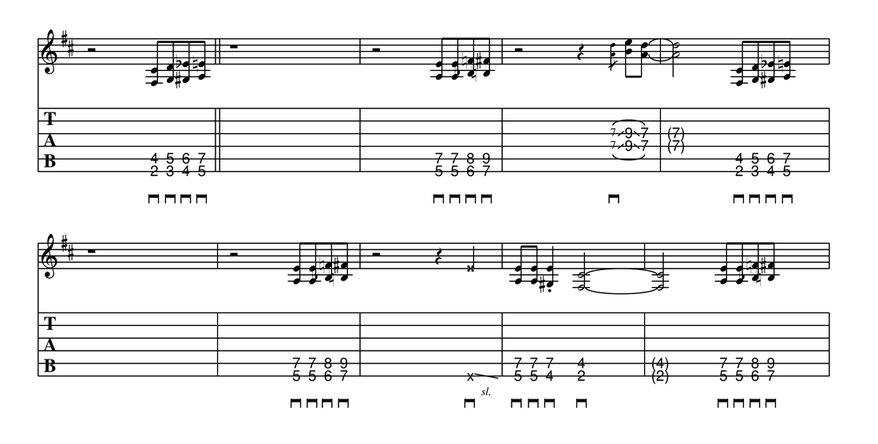 Here we have the best popping line on the album, it mixes quick alternate picking and 16th note syncopation, pay REALLY careful attention to the rhythm as its so exposed in the mix you are the feature here.

The Lady In My Life

Can anyone say Wes Montgomery? This is a jazzy octave line played with the thumb, again it is the main feature at this point in the track, so its important to play in the pocket and with conviction. 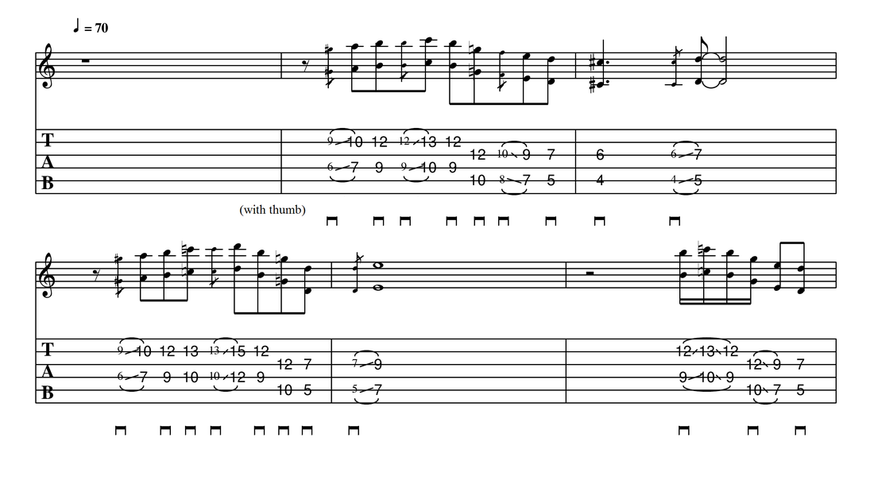 this last lick is played in unison with the keyboard, great rhythm, great tone. As long as you are in time, it's difficult to make this sound bad.