Since late 2012 Levi has been writing an instructional column for the hugely popular American guitar magazine, Premier Guitar. "Beyond Blues" has become a staple of PG's web exclusive educational supplements and has already built a solid readership from readers all over the world looking to develop their blues playing with in depth study of harmony, theory and phrasing concepts.

These lessons should take you down the Scott Henderson, Larry Carlton and Mike Stern route through developing your understanding of the fretboard, the CAGED system and the hidden harmonic tricks of the blues.

Here's to many more articles in the coming years!

For all Levi's lessons, check the following link: 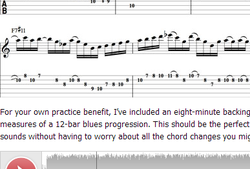 January's instalment kicks off with a look at intervalic modal theory. In simple terms, the goal here is to learn that mastering the sound of the modes of the melodic minor scale doesn't require learning all these new patterns and positions as we can learn how to turn the mixolydian scale into something a little more fusion by just changing the colour of the scale.

A great scale, an amazing sound and an instant bit of Scott Henderson.

Check it out via the link below or by clicking the picture
http://www.premierguitar.com/Magazine/Issue/2013/Jan/Beyond_Blues_Lydian_Dominant_Domination.aspx 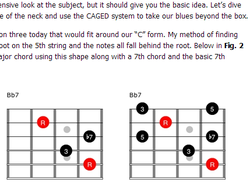 After the success of the first column, the feedback from readers seemed to highlight the confusion of the CAGED system, so in the second instalment we take a look at the CAGED system and how it can be used for complete fretboard mastery. We then use this concept to learn the third position of the system then use that knowledge to outline the V chord in a blues

This system is the basis of the playing of tons of greats, from bop icons like Joe Pass to blues masters like Robben Ford.

April 2013 - Chromatic Colours Adding Outside Notes To Your Lines 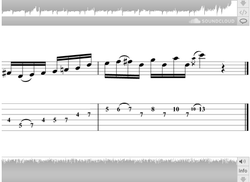 With some CAGED under our belts, the third instalment moves into the first steps of understanding the chromatic scale and how you can find some logic amongst all the chaos. When you look at bop players like Mike Stern, or Pat Martino you see phrasing like this all the time, so dig in if you want to add a little outside to your solos.

Aside from obvious bop players, you'll also find ideas like this in the rock playing of guys like Greg Howe or Alex Skolnick.